A Guide to Twitch Affiliation & Beyond

So you’ve decided you want to stream on Twitch and may have grand designs on becoming the next big Twitch Partner. While the road is a long & windy one, I would recommend you set a smaller goal as part of your journey and instead aim for Twitch Affiliate.

About a year ago - April 2017 - Twitch announced the Affiliate program as a means to support a greater number of streamers beyond the Partner program. This new program, based on a clear set of achievements, allowed a much larger number of qualified streams to:

To gain that coveted invitation to the Twitch Affiliate program, a streamer must stream at least 8 hours, on 7 unique days, and reach an average of 3 viewers in a 30 day period, while at the same time reach 50 followers. 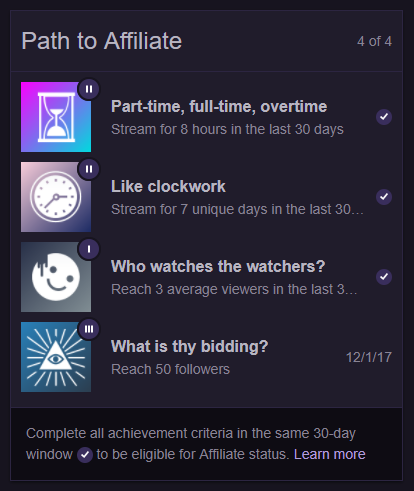 Of the four achievements, the two completely within your control - streamed hours & days - are relatively easy to hit. And in my observation, hitting 50 followers is also possible with consistent effort.

The toughest of the bunch is reaching the average of 3 viewers per stream. During my Path to Affiliate journey, I found this a constant struggle - while I’d peak out at 6 or 7 viewers on a regular basis, the average over the stream would bottom out at 2.

While there is no magic formula to get your average viewership up, there are a number of tactics that you can consider:

So Where Do I Apply?

That’s the thing - you don’t have to. If you hit those three achievements in the same 30 day period, and in turn have your 50 followers, you need only wait for the email to arrive in your inbox. For some, this happens within a day. For others, it can take a week or more. While there is no objective evidence of what triggers the invitation once you make the grade, it doesn’t hurt to have someone toss you a follow - kid you not that I received mine seconds after a follow once I qualified.

Qualified streamers will be invited via email, Notification, and an announcement in their dashboard. Invitations will continue to be sent out on a rolling basis as new streamers qualify for the program. Once a streamer has been invited, a new section will appear on their Settings tab that allows them to register for the Affiliate Program and enable Bits! - Twitch

Once you get that invitation, you’ll need to go through the Affiliate Onboarding process. This has you provide payment information, complete a tax interview, agree to a payout agreement, and select a payment method. And if you haven’t done so already, you’ll also need to add two-factor authentication to your account.

You also gain access to transcoding with priority access when it is available (you lacked the priority part as a regular streamer).

Good question. For some of us - me for instance - being a Twitch Affiliate is enough. For some of you, you aspire to be more and that’s cool too.

The road to becoming a Twitch Partner is not an easy one. It requires dedication and an investment of time. Sure you may win the lottery & get a raid from a big-time partner, yet most of the raid will come & go with the weather if you don’t provide a compelling product for people to return to.

And Twitch knows this.

Partnership is not something you simply acquire by hitting a few targets. That doesn’t mean there aren’t targets though: 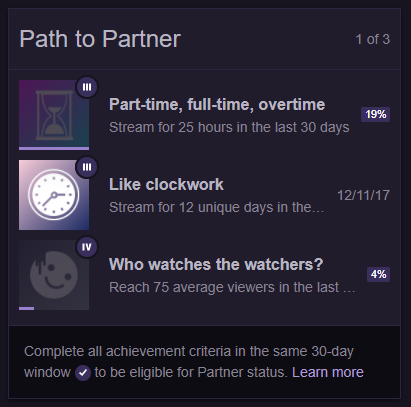 That’s right, three achievements - stream 25 hours on 12 unique days with an average of 75 viewers in a 30 day period - just to be eligible. And then you apply & hope for the best.

So what helps you with that application & those achievements? Well here are a few tips:

Very nice and detailed. I commend you for writing this.

The toughest of the bunch is reaching the average of 3 viewers per stream.

This can actually be the easiest requirement if you are resourceful. I found it to be simple during my quest for affiliate. I tried a hunch and it seems to have been successful in attaining affiliate status.

You may have to check your scruples, though; some folks might consider it unethical.

For this reason I will only share it in this thread if @lyteforce approves. Otherwise, if anyone is struggling to get those 3 average viewers and needs some help, feel free to PM me and I will share the knowledge.

Edit - On second thought, it isn’t much different than the community viewing page that we set up so the ethics aren’t a big deal.

I’ve got trouble with average 3 view stream… How am i got to do?