So for those that are unaware, Destiny 2 - Year 2 is beginning very soon.
The “Pre-Patch” is dropping on August 28th, with the official drop of the “Forsaken” expansion on September 4th.

The patch coming on the 28th is bringing a host of changes that the community has been asking for since the launch of Destiny 2 last year. This includes Weapon Slot Changes, Faster Time to Kill in Crucible, changes to Competitive Crucible, as well as many other sandbox changes.

These changes are all FREE to anyone who already owns Destiny 2, and does not require the Forsaken expansion to enjoy these.

So anyone who is interested in seeing how Destiny is going to change in Year 2 can hop in on the 28th and see for themselves without forking out more money for an expansion.

The Weapon Slot Changes are one of the biggest things coming in this patch.

Above is the way Destiny 2 weapon slots work at the moment. For example, the weapon in the top slot, “Better Devils” is a Kinetic weapon which can only go in the Kinetic Slot. The slot below can only be slotted with “Energy Weapons” and the 3rd slot is for “Power Weapons” only.

The upcoming patch will bring changes that will allow for much more flexible loadouts. 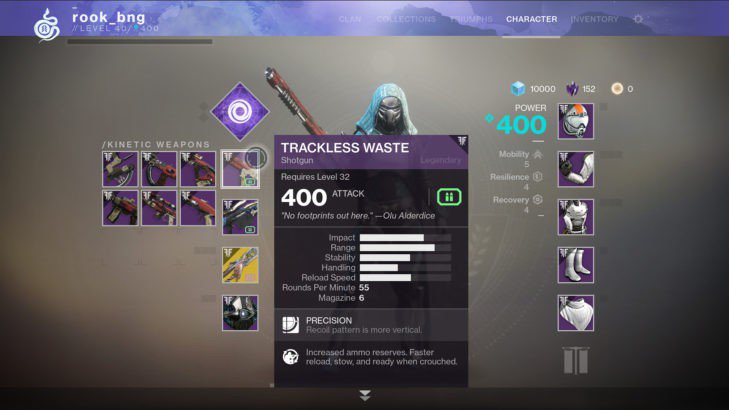 As you can see from the screenshot above, “Trackless Waste” is a shotgun, formerly confined to the “Power” slot. It is now slotted in the “Primary” Slot and uses “Special Ammo”

The type of ammo that a weapon requires is now a sort of attribute of the weapon. Weapons using “Primary” or “Special” ammo can be slotted into either of the first 2 weapon slots, while the bottom slot is still reserved for “Heavy” weapons.

One of the main changes around heavy weapons in this patch is the removal of exclusivity on certain weapon Types. Shotguns, Sniper Rifles, Fusion Rifles, and Single shot Grenade Launchers are all weapons that were formerly confined to the “Power Slot” but will be available for the “Special” and/or “Primary” slots with the new changes.

Along with the Weapon Slot changes, big changes will be coming to both weapons and armor in the form of revamped “Mods” system.

The image above shows the Mods system as it exists currently in Destiny 2.
As you can see, mods for this Power weapon simply change the type of elemental damage it will deal. There is really nothing more to it other than using a legendary mod will provide +5 to my Power Level. 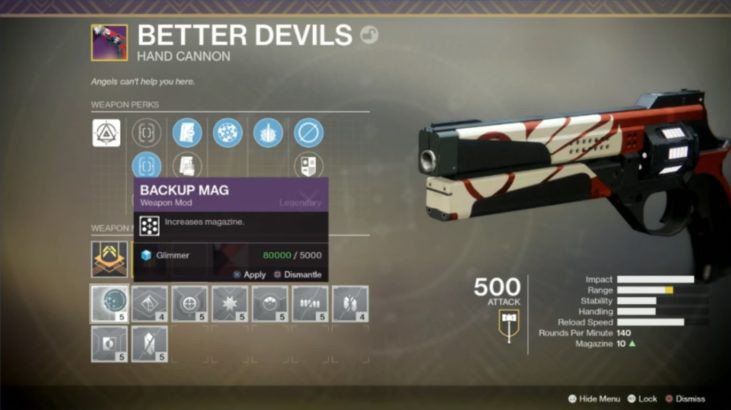 In this example, you can see that a mod has been used to give this Better Devils a larger magazine. In a demonstration by Bungie they showed several mods that offer a lot of utility, unfortunately I can’t find many images to provide more examples. But even this one example offers way more customization than simply changing the energy type.

And this new mod system will also apply to Armor as well.
The examples they discussed around armor were things like “Ability Cooldown”, “Super Generation”, “And Grenade Cooldown”. So if you so wish, you can apply Grenade cooldown mods to all 5 pieces of armor and enjoy something like 50% or more, faster grenade cooldowns.

There is a LOT more going on with this update, but I just wanted to touch on the bigger stuff, and try to not mention the actual “Forsaken” expansion content, since that requires money to be spent.

But I’ve been playing quite a bit of Destiny 2 lately with my man @NVS_1 and having a blast.
You guys should come join us on the 28th, and check out these massive changes!

Awesome writeup @Wayward! I even learned a few things too. I knew the mod changes were coming, but didn’t know in what way. I’m hyped!

Yeah, I’m pretty stoked. I have always wanted more customization in the way I build my class. And now there might actually be some difference between other players of the same subclass.

I didn’t mention above that every single sub class will get access to a new Super, which makes the possible customization even more diverse. I am just not sure if the new supers come in the patch or the expansion.

I have always wanted more customization in the way I build my class.

If there’s one thing that was a bit upsetting coming from Destiny to Destiny 2 it was the removal of so much class customization. Sure, some of the perks in Destiny with duds and there were only ever 2-3 “meta” builds for any given class, but it was nice having more options; I’m glad to see they’re bringing more customization into Destiny 2.

The patch coming on the 28th is bringing a host of changes that the community has been asking for since the launch of Destiny 2 last year. This includes Weapon Slot Changes, Faster Time to Kill in Crucible, changes to Competitive Crucible, as well as many other sandbox changes.

I personally have not been asking for faster TTK. People die fast enough already. This isn’t CoD.

I watched the stream a couple weeks ago where Bungie highlighted the new combat. In certain situations, people will be dying in 2 or 3 shots. As in, 1 or 2 body shots to destroy shield and then 1 head shot.

I haven’t pulled the trigger on purchasing the DLC yet. I want to… I really do, but I’ve turned into a semi-responsible parent and now give pause to all my discretionary purchases. And as I have a trust issue with Bungie right now, it’s hard for me to give blind faith to what my money will get me.

Then there’s this added wrinkle - if that trust is earned back, will too much time have passed to make the DLC worthwhile? Or will others have moved on to different titles by then?

if that trust is earned back, will too much time have passed to make the DLC worthwhile?

My suggestion is to give it a shake when the pre-patch drops, with the intention of NOT buying the expansion. Just see how the changes strike you.

I personally have not been asking for faster TTK. People die fast enough already. This isn’t CoD.

Generally i would tend to agree with you but the footage of the revamped pvp looked like it worked. In a game that is fast paced non-stop action like Destiny, faster TTK might work. I’m willing to give it a shake.

I reinstalled Destiny 2 just last night while scrolling through launchers thinking about what I was going to play instead of buying Monster Hunter.

Hit me up, we’ll play some Crucible!

Or I can help you with you Solstice gear if you want to try for it. Though there is only 1 week left and it’s a considerable effort to get.

Just a reminder that the Pre-Patch drops this Tuesday.
So if anyone was interested in checking it out you might want to re-install.

Also, on Sat. Sept. 1st, the new PvP/PvE Hybrid gamemode “Gambit” will be free for everyone to try out.
I might make a separate post explaining gambit if people would like to know what it is. But this will be your only chance to try it without buying the “Forsaken” expansion.