So after the title leak we got a bunch of pictures that leaked.

So yeah… Pre-Order for a Black Gjallarhorn…

Destiny: Rise of Iron is the next highly anticipated expansion to the Destiny universe. The wall which stood for centuries along the southern border of Old Russia has collapsed. Fallen mutants now scavenge the tombs of the Golden Age, and the plague they have unearthed is more dangerous than even they understand. Join Lord Saladin. Journey into the Plaguelands. Learn the fate of the Iron Lords and stop the growing threat before it is too late. 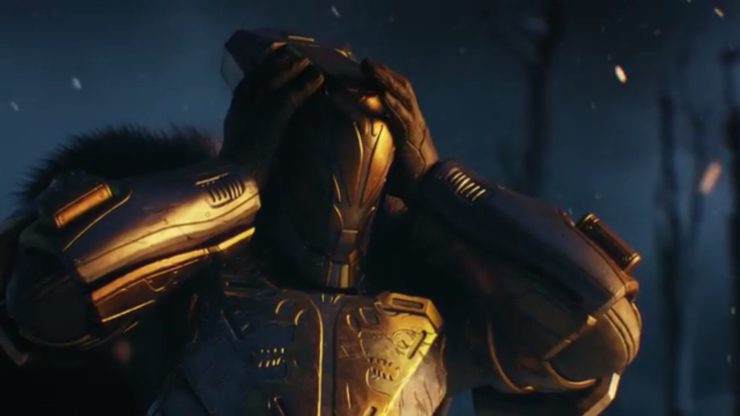 Destiny: Rise of Iron Trailer Leaked via Snapchat, Take A Look At The Gallery

The entire Destiny: Rise of Iron trailer leaked ahead of the official announcement. Here's a gallery with all the snapshots.

During the official Bungie update this past Thursday, much of the leaked information has been confirmed. They also shared that the expansion will set you back $29.99 USD (though it seems that it’s also $29.99 CAD for those of us north of the border).

And many apologies to those of you on old-gen consoles - this bad boy is going to be next-gen only!

New Gjallarhorn - available through a questline where you forge your new horn with parts of armour from fallen Iron Lords. Black version is exclusive for those who pre-order.
Flaming Battle Axe - acquired during in-game play and used for a short period of time - similar to how Scorch Cannon currently works.

People went nuts of the leak of Gjallarhorn. You should’ve seen the reaction when it became apparent that you could get an Axe for a spell.

While not too many details were shared during the live stream about the social space, what we did learn is that we’ll have to fight our way in and capture it before it will become available to us. Kinda cool IMO.

Could it be that the new PvP mode is private matches? Or am I just reading into the singular?

Significant Light Level increase - more details released over summer (they made mention they were still working on the number).

While just a quick tour to introduce some of the updates a portion of the Cosmodrome is receiving - winter is coming - we did find out that anyone who preorders will also receive an Iron Gjallarwing Sparrow to complement their Iron Gjallarhorn.

I’m hyped! My wife, son, and mother in law are leaving town for a long weekend on release week, so it’ll be me, the dog, and my non-stripper friend Destiny.

Well that is one way to get everyone to pre order. Take everyone’s favorite gun out of the game for a year that for many was so hard to get in the first place and then give a new version of it away for free. Take My Money Bungie!!!

Destiny has been stripping your soul for years now

I will definitely be back for this. Totally stoked!!!

Most of original post is now at the top!

In an interesting twist, it’s listed at par in the Canadian store so I’ve already jumped on it:
July 20 - that mistake was fixed & it now represents a higher price in $CAD

Once I get away from work and up to the inlaws, consider this updated.